Flughafen Zürich AG dedicates considerable attention to the issue of aircraft noise. Its Noise Management department analyses and documents the noise situation and documents it transparently.

Flughafen Zürich AG operates a network of 14 stationary noise monitoring stations near departure and arrival routes. The data collected are published monthly in a noise bulletin.

Changes in exposure to aircraft noise are mainly related to the different usage of individual take-off and approach routes. 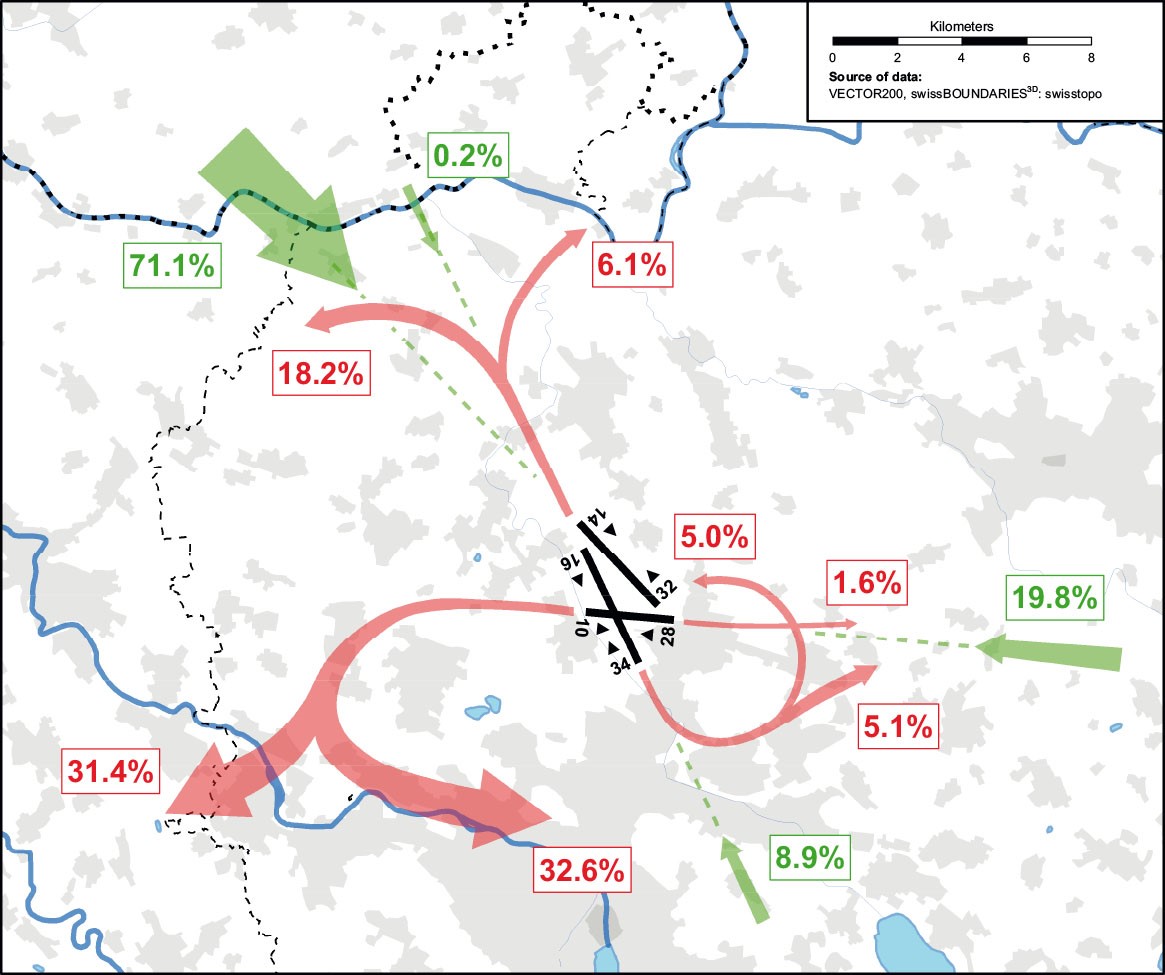 Usage of landing and take-off routes in 2017 (in % of total traffic). Routes with less than 50 flight movements per year are not shown.

The Noise Management department monitors all departures with the prescribed flight paths which are mandatory during the daytime up to an altitude of 5,000 feet above sea level and at night up to flight level 80 (approximately 8,000 feet). In 2017, 167 (2016: 154) investigations were triggered and 25 (2016: 36) interviews with chief pilots were conducted. The most frequent reason for deviations from the prescribed flight paths were specific instructions from air traffic control.

Flughafen Zürich AG encourages airlines to operate the quietest possible aircraft on their connections to Zurich. All jet aircraft are assigned to one of five noise categories, each of which has a different charge rate. Graduated charges are levied for take-off and landing. In addition, the rates for night-time flights vary according to noise category and the specific take-off or landing time. In 2017, at around 56% (2016: 62%), noise category 4 accounted for the highest percentage of flights during the night (10 p.m.–6 a.m.).

An amended noise charge model was submitted to FOCA at the end of 2014. It provides for an increase in the off-peak night-time surcharge and an easing mechanism for airlines with long-haul connections. However, this mechanism will not apply to the particularly noise-sensitive period from 11–11:30 p.m. (30 minutes for delayed flights). In November 2017, FOCA commissioned an expert report which aims to review the steering effect of the amended noise charge model. In addition, the Competition Commission was requested, to review the planned easing mechanism.

Use of the noise protection hangar

In 2017, the maximum noise exposure level for engine tests was exceeded five times. This is significantly less than the 25 instances permitted per year in accordance with the operating regulations. According to figures provided by the aircraft maintenance companies, 611 additional idle tests were performed on the apron and on the stands. A total of 473 idle tests were carried out during the day between the hours of 6 a.m. and 10 p.m., and 138 were run at night between 10 p.m. and 6 a.m.

Communication with local residents is important to Flughafen Zürich AG. Local residents affected by aircraft noise can call or e-mail Flughafen Zürich AG directly with questions or complaints. The staff of the Noise Management department will respond to specific questions in due time. In 2017, landings on runway 34 constituted the most frequent cause for complaints. In comparison with the previous year, questions and complaints rose by 13%, mainly due to the many runway changes necessitated by turbulent weather conditions.