Flughafen Zürich AG is of course committed to the responsible use of drinking water, as well as to the appropriate treatment of the waste water produced at the airport.

The fresh water used at Zurich Airport comes from three different sources: firstly there is drinking water which comes from the municipal water supply for the town of Kloten. Secondly, groundwater is pumped away from under the main airport complex to lower the groundwater table and keep dry older buildings that cannot be sealed. Some of this water is used in technical systems and the remainder is channelled into the river Glatt. Thirdly, rainwater is collected for toilet flushing.


During the year under review, consumption of drinking water was up 8% on the previous year. This was due on the one hand to the increase in passenger numbers, and also to the much higher demand for water for THE CIRCLE construction project. Consumption of fresh water per passenger rose slightly to 27.2 litres.

In line with its “avoid-separate-treat” approach, Flughafen Zürich AG aims to produce as little sewage as possible. Its general drainage plan includes both measures to ensure drainage systems comply with the law and specifications regarding the operation and maintenance of the existing sewage system.

Various types of waste water arise at Zurich Airport. All domestic waste water, from toilets or restaurant kitchens for example, is channelled into the local sewage treatment plant at Kloten-Opfikon where it is treated. The sewage plant, which is a joint venture between Flughafen Zürich AG and the municipalities of Kloten and Opfikon, is currently being renovated and extended. Waste water from workshops or from aircraft toilets requires pre-treatment before it can be sent to the sewage plant or otherwise appropriately disposed of.

In order to ensure safe flight operations, in winter it is essential to keep both aircraft and operational areas free of ice. During the winter of 2016/17, 1921 m3 of de-icing agents (propylene glycol) were used for aircraft de-icing (38% more than the previous year). A total of 1,301 m3 of liquid de-icing agents (+45%) were required for runways, taxiways and aprons. 492 tonnes of conventional de-icing salts were additionally used on service roads, in the car parks and around the maintenance area. The quantities are slightly higher than the long-term average; the large jump in the year-on-year figures is due to the quantities used the previous year being well below average. The quantities of de-icing agents used vary considerably from one winter to another, depending on the amount of precipitation and temperatures. 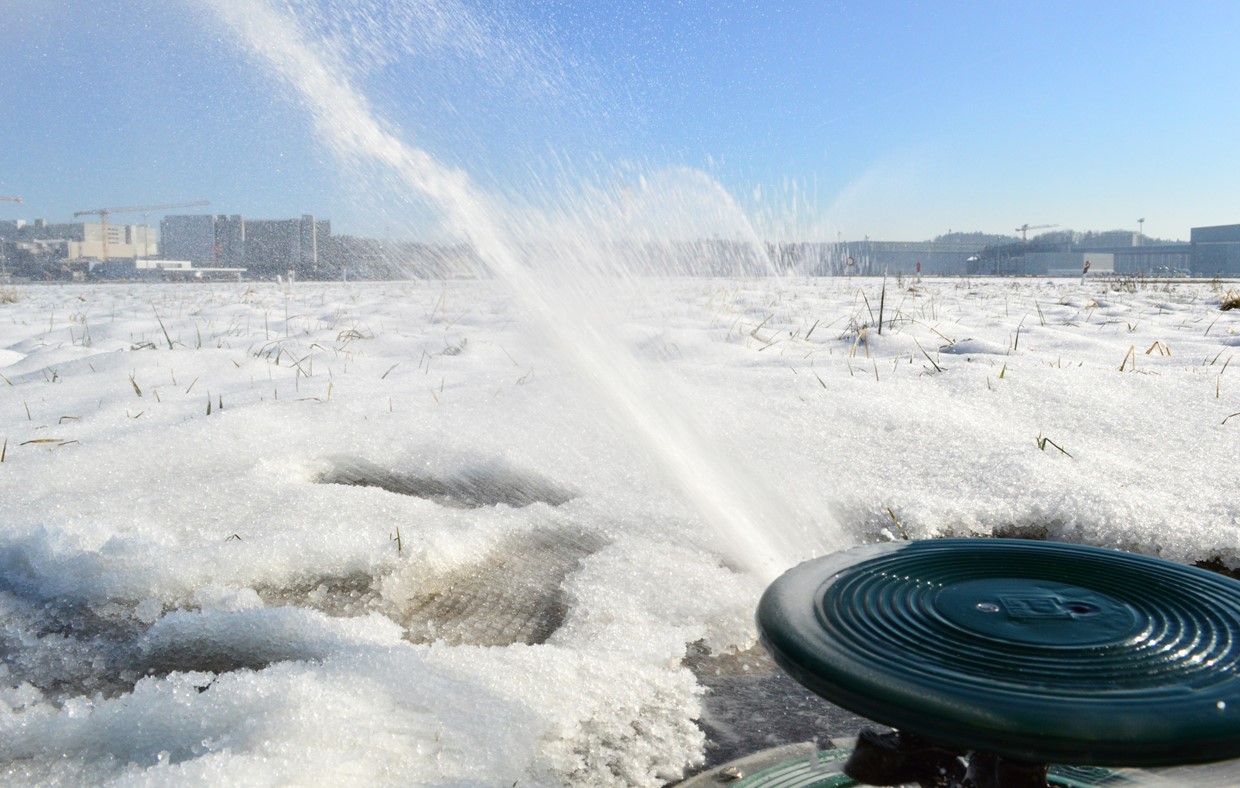 De-icing aircraft with hot water and propylene glycol as well as spraying formate-based de-icing agents on operating surfaces results in waste water contaminated with carbon compounds. If untreated waste water were to enter natural watercourses, it would remove oxygen from the water, which would be a problem for aquatic organisms. To prevent this, the waste water is collected and is then treated depending on the level of carbon concentration. Water that is only slightly polluted is first channelled through retention filter basins and then into the Glatt. Medium-contaminated waste water is sprayed over grassed areas using a special sprinkler system. As the water filters down through the soil, the glycol it contains biodegrades completely. Heavily contaminated waste water is treated in the airportʼs two distillation plants, where the glycol is concentrated and then supplied as a raw material to industrial companies.