Zurich Airport’s operations produce some emissions that affect air quality. The impact of these is essentially local, however.

At Zurich Airport, air pollutants arise from the following four source categories: aircraft, handling operations, the airport’s infrastructure and landside traffic. Because pollutants are produced primarily from the combustion of fossil fuels such as kerosene, diesel or petrol, aircraft are responsible for the majority of emissions, namely around 90% of nitrogen oxides.

As they can be considered an indicator pollutant, nitrogen oxides (NOX) are generally indicative of the overall air quality. Particulate matter (PM) and ozone (O3) are also important. Flughafen Zürich AG maintains an emissions inventory which records how much of each individual pollutant is emitted annually. Zurich Airport comfortably meets the applicable nitrogen oxide emission limits.

This mathematical modelling is based on the emissions inventory and additional information about the time and location of emissions. Combined with meteorological data, it is then possible to calculate the distribution of the pollutants using special software.

A network of monitoring equipment which measures actual concentrations has been set up across the airport and the surrounding region. Both fully automatic monitoring stations that measure the levels of several pollutants at the same time as well as passive collectors that measure the nitrogen dioxide content in the air are used. Both types of monitoring station are operated on behalf of the airport by the Office of Waste, Water, Energy and Air (AWEL) of the Canton of Zurich. 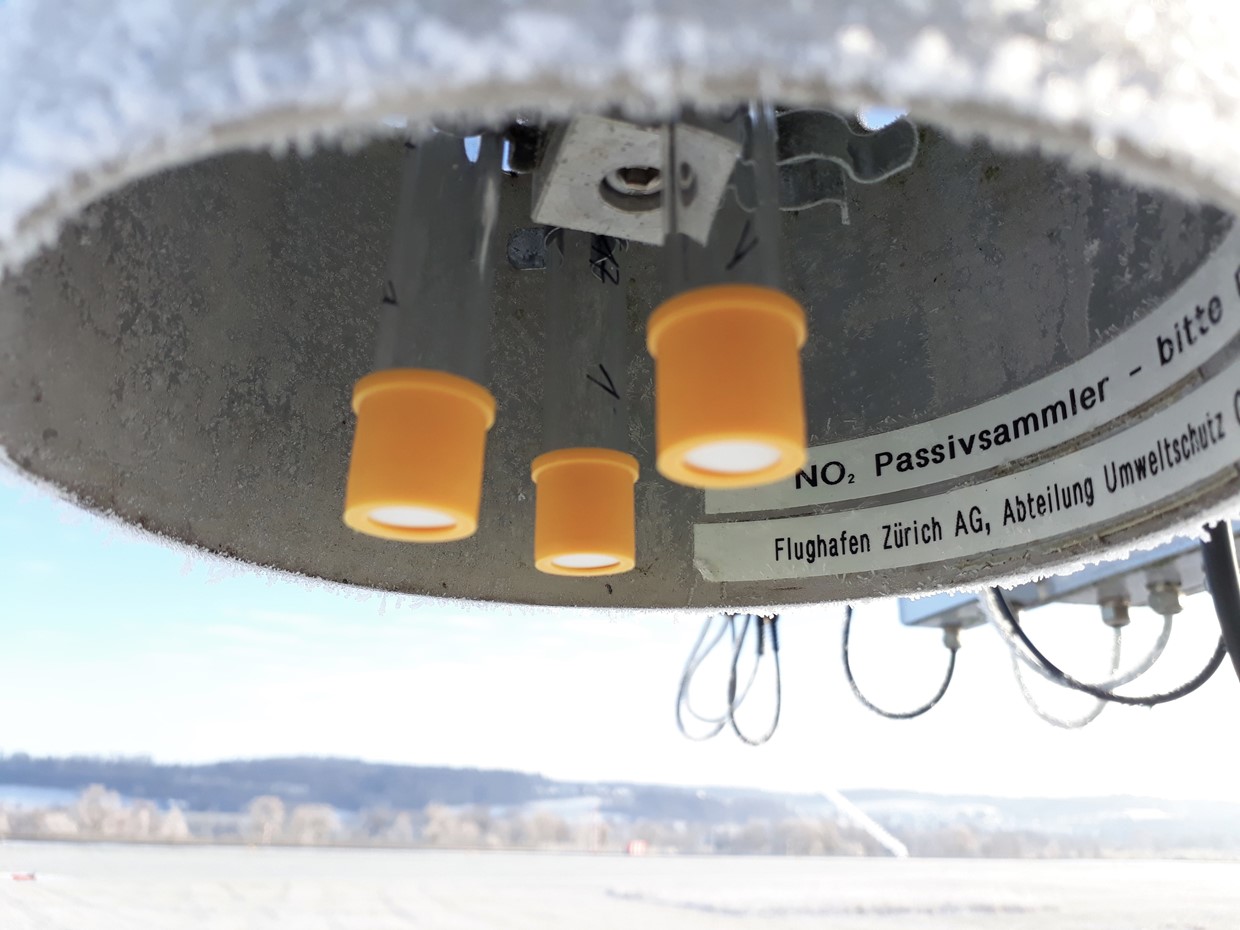 Passive collectors are used to measure the concentration of nitrogen dioxide.

The quantity of nitrogen oxides NOX emitted by airport sources increased again, by 10% compared with the previous year. This is largely due to a rise in the number of flight movements with generally larger aircraft, which produced a correspondingly higher quantity of emissions.

By contrast, measured pollutant values were lower. Although the limits were exceeded on the apron and along the main roads in the region at certain times, levels of pollution from the airport fall rapidly, the further away one gets from the airport. Outside its perimeter, emissions from the airport account for a maximum of 10% of the total air pollution measured there. 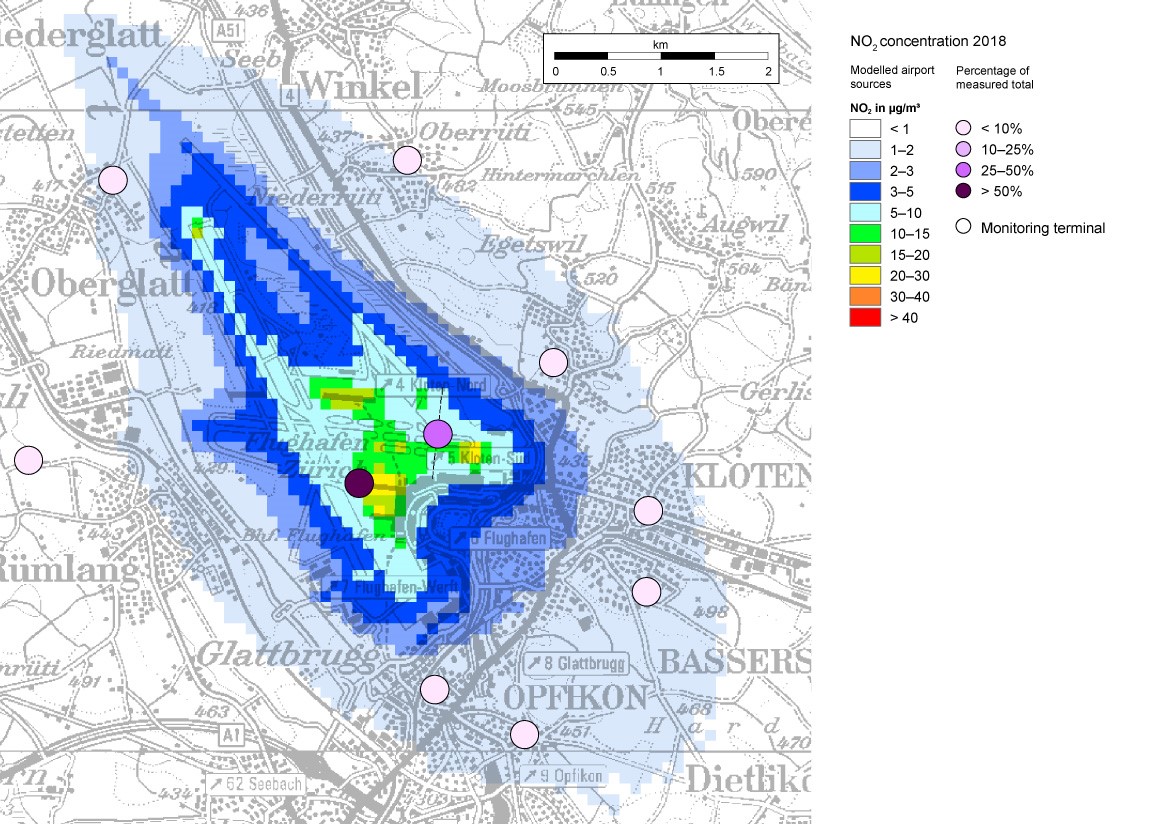 Flughafen Zürich AG has already taken a number of steps to help reduce air pollutant emissions. It has levied emission-based landing charges since 1997: the more pollutants an engine emits, the higher the charge. This then creates a monetary incentive for airlines to use low-emission engines.

The airport also has a major influence on efforts to reduce fuel consumption on the ground and consequently reduce the associated emissions. Airport Collaborative Decision Making (A-CDM) is a concept aimed at enabling aircraft to efficiently taxi out to the start of the runway and avoid queuing times. The same principle also applies to landing – aircraft are already lined up optimally in the air so they can then be integrated in inbound processes without delays.

Similarly, decisions about where to site aviation infrastructure on the ground have a direct influence on subsequent pollutant emissions: shorter routes mean fewer emissions.

Another important measure is the provision of fixed ground power systems. Thanks to these, on-board auxiliary power units for electricity and air conditioning can remain switched off while more energy-efficient sources are used instead. The new “Golf” aircraft stands have all been equipped with ground power units.

For many years now, the use of ground vehicles powered by electric motors rather than internal combustion engines has helped to cut emissions. The number of electric-powered vehicles and equipment used for aircraft servicing and ground handling at Zurich Airport is continually rising – they already make up over 30%.

Internationally, Flughafen Zürich AG is among the world’s leading pioneers in matters of air quality. It offers its expertise in various international organisations and technical bodies, sharing know-how and new ideas with other airports around the world. It is also involved in the further development of models, regulations and technology.