The Zurich Airport Group works hard to mitigate the negative impacts of air pollution. Globally, it is one of the leading airport operators tackling this issue.

A range of air pollutants from one of four different source categories are emitted at airports: aircraft, handling operations, airport infrastructure and landside traffic. Pollutants are primarily produced by the combustion of fossil fuels such as kerosene, natural gas, heating oil, diesel or petrol. In addition, particulate matter is produced by tyre abrasion. In comparison with the other sources, aircraft account for the majority of emissions.

In order to assess air quality at Zurich Airport, pollutants must be monitored from two different perspectives: firstly the quantity emitted at source (‘emissions’), and secondly the quantity measured at a specific location (‘pollution’). A complex interrelationship exists between emissions and pollution exposure: once discharged into the atmosphere, emissions do not remain in the same state – their composition changes, and they are diluted and dispersed before actively becoming pollutants.

Flughafen Zürich AG does everything necessary on the one hand to report on the air pollution situation fully and transparently, and on the other hand to minimise its impact on the environment as far as possible. Today it is known that the air pollution caused directly by airports is only significant within a very narrow radius. In the case of Zurich, residential areas are affected by pollution exposure only to a limited extent.

Official nitrogen oxide emission limits are specified for Zurich Airport. To document compliance, Flughafen Zürich AG maintains an emissions inventory which records how much of each individual pollutant is emitted annually. The company must also comply with emission standards specified for individual emission sources such as vehicles or heating furnaces.

Concentration standards likewise apply to pollution exposure; this is measured at certain locations and is also modelled over the area as a whole. A network of monitoring equipment has been set up across the airport and the surrounding region. Both fully automatic monitoring stations at Zurich Airport itself as well as passive samplers that measure the amount of the indicator pollutant nitrogen dioxide in the environment are used. Flughafen Zürich AG commenced operating the fully automatic monitoring stations itself from the beginning of the reporting year. The company is taking steps aimed at reducing air pollutant emissions in all four source categories, and not only the ones it produces itself, but also those produced by its airport partners.

Flughafen Zürich AG has long levied emissions-based landing charges to encourage airlines to use low-emission aircraft. Fixed ground power systems to supply electrical power and air conditioning to aircraft are mandated at all gate parking stands. This results in far lower noise, CO2 and pollutant emissions than if aircraft were to use their own auxiliary power units. Operational processes have also been optimised to minimise the amount of time aircraft spend queueing with their engines running. In ground handling, the transition from combustion engines to electric-powered vehicles and equipment is already well underway. Where infrastructure is concerned, new and renovated buildings plus operating optimisation are helping to reduce the demand for fossil-based heating and consequently lower pollutant emissions. Zurich Airport is also taking a number of steps to encourage people to use public transport for travelling to and from the airport, hence reducing private car transport.

During the year under review, emissions of almost all air pollutants at Zurich Airport rose slightly over the previous year. Compared with the period prior to the Covid-19 pandemic, the figures are still down by approximately half. The concentration figures continued to be significantly lower than the long-term average, and no limits were exceeded. 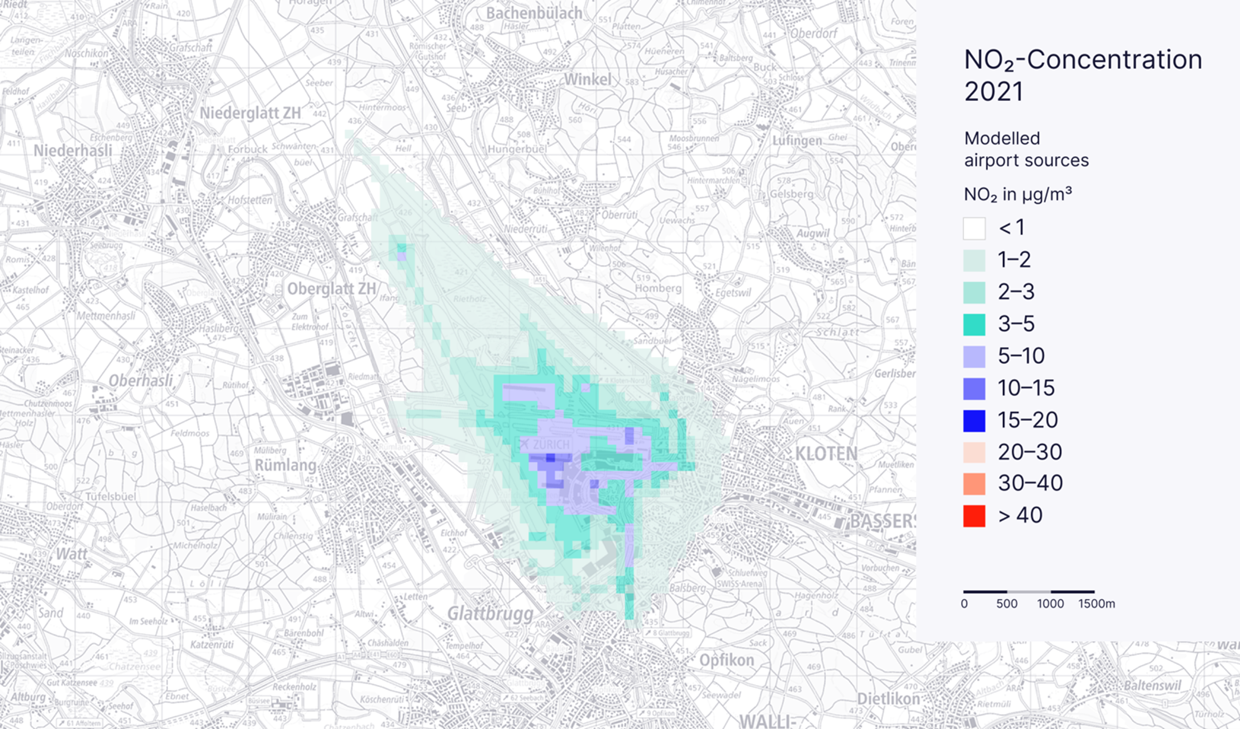 No information regarding the air pollution situation is available for the airports in Latin America. Likewise, as yet there are no measurements for Noida in India, although preparatory construction work commenced before the end of the year.

2) Retroactive adjustment to the calculation method.