Zurich Airport requires considerable quantities of electric power, heating and cooling. More and more of this is being generated using sustainable technologies.

Flughafen Zürich AG seeks to ensure a secure, economic and environmentally responsible energy supply for the airport well into the future. To achieve this, it aims to reduce primary energy consumption, smooth out peak demand and increase the airportʼs energy autonomy. At the same time, it must achieve its climate protection goals.

OPENING OF THE CIRCLE

With the construction of the Circle, which opened its doors during the year under review, Flughafen Zürich AG has demonstrated what a carbon-free future could look like. The complex was built to be energy-efficient in compliance with LEED® PLATINUM and MINERGIE standards and to use alternative energy sources. In summer, the heat given off the cooling units is transferred to geothermal energy piles below ground. In winter, the energy piles then serve as a heat source for heat pumps. In this way the entire complex can be supplied with energy using hardly any fossil fuels. 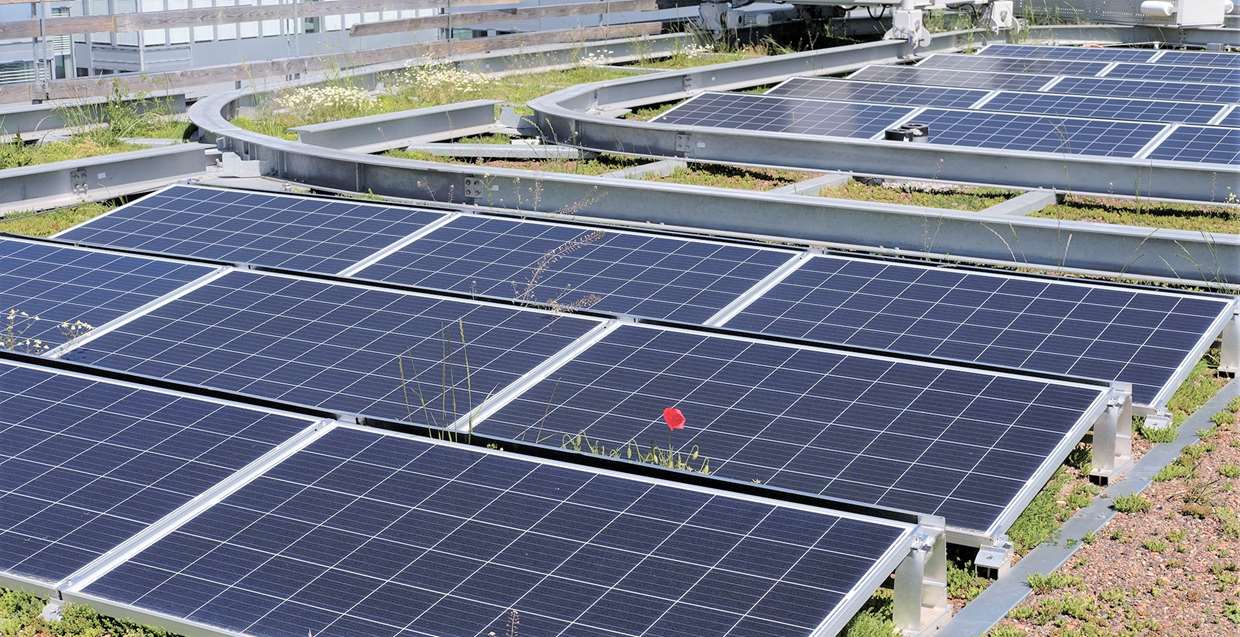 Rooftop installation of photovoltaic arrays on the Circle.

Renewable energy sources such as photovoltaics for generating electricity or shallow geothermal energy are increasingly being used to meet the airportʼs energy demand. Borehole heat exchangers are used to provide heating and cooling for the Circle and Dock E as well as two buildings in the maintenance workshop area. And whenever buildings are being erected or upgraded, their suitability for a photovoltaic installation is always considered.

Using a combined heat and power generation system, the airportʼs own heating plant delivers both electricity and heat, which is distributed over an extensive district heating network. Even buildings that are chiefly heated geothermally are connected to this network so they can utilise the circulating heat during periods of peak demand. The main fuel is natural gas, and a small amount of fuel oil is used.

The shutdown of infrastructure resulted in lower energy demand.

Owing to the coronavirus pandemic and the resulting drop-off in all activities (flight movements, general footfall, etc.), Zurich Airport required significantly less electricity during the year under review. In addition, Flughafen Zürich AG decommissioned some specific parts of the infrastructure and reduced cooling in order to make further cost savings. 130,406 MWh of electricity was required, which represents a decrease of 20%.

The extraordinary situation did not have such a direct effect on the demand for heat, however. Occasionally the heating demand was actually higher because internal loads (people, electricity-consuming equipment) were not present. The weather also has a big influence. At 98,039 MWh in 2020, demand for heating purposes was on a par with the previous year.

Expressed in primary energy terms, overall demand came to 411,709 MWh, some 17% less than the previous year. Primary energy also includes the energy necessary for generation and transmission which is required before the energy can be used in the form of electricity and heat.

As a large-scale consumer, Flughafen Zürich AG has signed an agreement with the Building Department of the Canton of Zurich. This obliges the company to make average annual efficiency improvements of 2% until 2030, measured on the basis of the number of user units and the heated area of the airport. Thanks to the gradual commissioning of the Circle, which is being factored in for the first time in terms of space and consumption, the target for specific energy consumption was also met in the year under review.